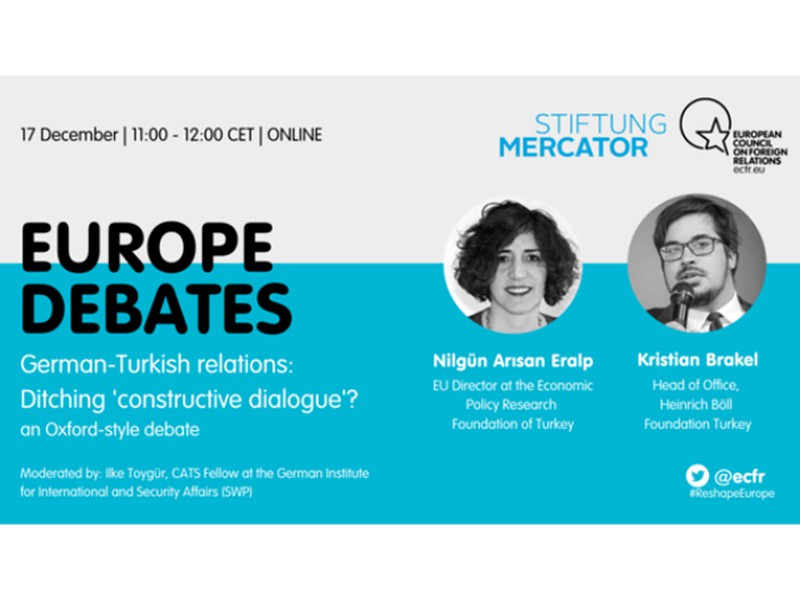 This event is part of ECFR’s Re:shape Global Europe project funded by Stiftung Mercator, organised in cooperation with the Centre for Applied Turkey Studies (CATS) at the German Institute for International and Security Affairs (SWP).

Nilgün Arısan Eralp, EU Director at the Economic Policy Research Foundation of Turkey (against the motion)

During her last visit to Turkey as chancellor of Germany, Angela Merkel repeated a long-held position: “differences – on human rights, Cyprus or other issues – can only be resolved through talks and contacts.” Turkish president Erdogan received her praise for halting migration into the EU and for finally ratifying the Paris climate agreement.

Yet, under Erdogan’s rule Turkish democracy has been rolled back. Turkey also withdrew from the Istanbul Convention on preventing and combating violence against women. The number of political prisoners has skyrocketed, especially since the 2016 coup attempt. In the region, too, Turkey has been playing a more assertive role, supplying weapons to Azerbaijan in its recent conflict with Armenia, fuelling the civil war in Libya, and challenging Cyprus and Greece by exploring natural-gas reserves in the Eastern Mediterranean.

Should the next German government ditch Merkel’s “constructive dialogue” with Turkey and join France and Greece for a more confrontational approach?

Save to your calendar

Download event as .ics file, to add it to your calendar.